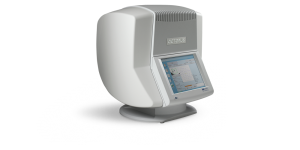 Octopus® 600 – The New Pulse in Perimetry

The Octopus 600 performs standard white-on-white threshold testing in just 2–4 minutes in the central visual field. With its comprehensive test library for central tests including G, 32, 30-2, 24-2, M, and 10-2 and its flexible printouts both in Octopus and HFA-format it covers your essential clinical needs.

The central tests you need

Enjoy a smooth transition from a HFA to an Octopus perimeter. All Octopus perimeters allow you to import your historic HFA data. Because raw data is imported, you can display your historic and new data in the same format of your choice, either as an HFA-style printout or in the Octopus format. To learn more about how the two formats correlate, watch the movie.

Use your Octopus 600 as a fast screening device and quickly distinguish between normal and abnormal visual fields. Screening can be performed with both standard white-on-white or the patient-friendly Pulsar perimetry designed for early glaucoma detection.

Less than one minute

Use the new Glaucoma Screening Test GST to distinguish between normal and abnormal visual fields in less than one minute. The test is purely qualitative and distinguishes between normal and abnormal visual fields by presenting stimuli three times at a brightness that patients with normal vision should see. If not seen, then the visual field is flagged as abnormal with high reliability and the patient can be further tested. Because the test is efficient, it opens doors for more routine visual field testing to ensure no pathology goes undetected.

Made easy for patients

A screening test has to be easy to complete by definition. That’s why the patient-friendly Pulsar stimulus is recommended for screening purposes. It has been developed for early glaucoma detection and shows a short learning curve and low test-retest variability.

A clear view on glaucoma

Get the most out of your glaucoma visual field with the highly sensitive Cluster Analysis, the intuitive Polar Analysis for structural comparisons and the easy-to-interpret EyeSuite Progression Analysis.

Immediately identify levels of change with the EyeSuite Progression Analysis. It not only reveals whether change is significant, but also whether it is local or diffuse and how fast the change happening. For an effective clinical workflow, all results are displayed using intuitive graphical symbols and can be viewed directly in your office if the Octopus is networked.

The sensitive Cluster Analysis groups visual field defects along nerve fibre bundles and combines high sensitivity with good specificity to detect early glaucomatous changes. Significant defects are highlighted and the cluster defects can be used for structural comparison. Cluster Analysis is available in both single field and trend view.

Combining the results of both structure and function is key to obtaining a comprehensive assessment of the onset and progression of glaucoma. The Octopus Polar Analysis projects local visual field defects along the nerve fibers to the optic disk and displays them oriented as structural results. This makes structure-function correlation almost intuitive. Polar Analysis is available in both single field and trend view.